In art, perspective is used to create the illusion of three dimensions on a two-dimensional surface. It was the Renaissance artist Leon Battista Alberti and architect Filippo Brunelleschi in the fifteenth century who first started talking about “linear perspective,” the use of straight lines or lines created by light to understand the change from near to far from a particular point of view. Alberti’s “vanishing point,” the place where parallel lines converge, has been used by artists, architects, and designers ever since. 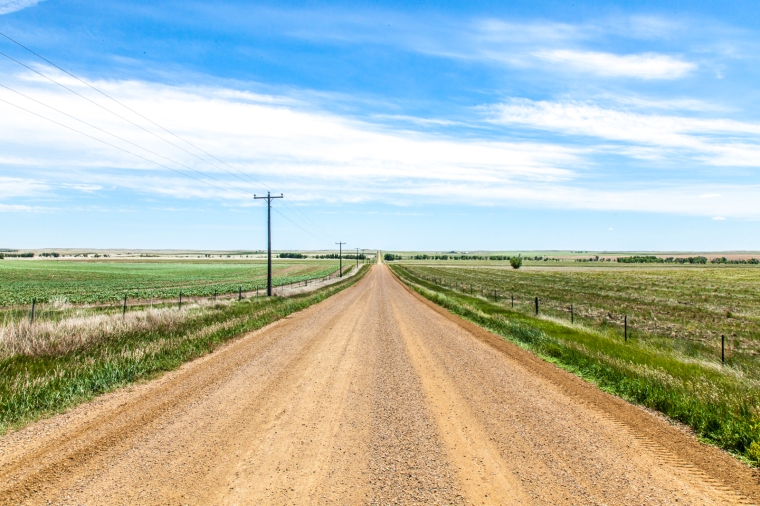 Whatever the imaging objective might be, whether to inform, persuade, sell, or express a feeling, perspective will create depth to a scene and enhance its forms, giving the image an overall more natural and real-looking sensibility. It’s how we see the world.

Perspective can enhance the illusion of depth by looking for and becoming aware of vanishing lines, considering the camera’s point-of-view (POV), placement of the horizon line, and location of subjects, particularly people, relative to the vanishing lines. 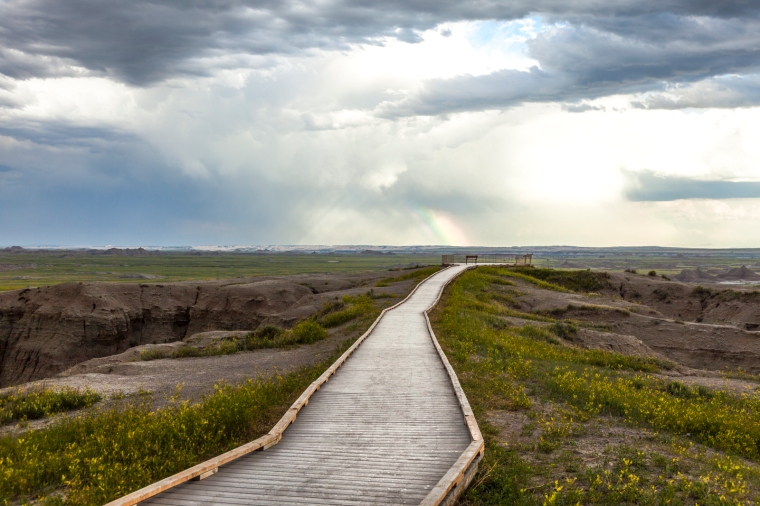 Some converging lines are obvious.

Others are less obvious but still contribute to the feeling of depth. Here, the buildings and the diminishing size of people and vehicles consist of vanishing lines. 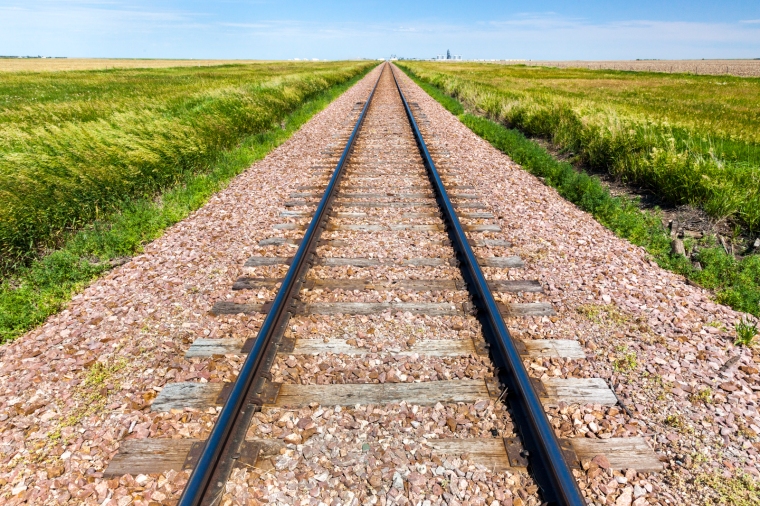 A high point of view shows a lot of ground.

A medium point of view divides the frame in half—not a good strategy because it divides the viewer’s attention between the features on the ground and the sky. 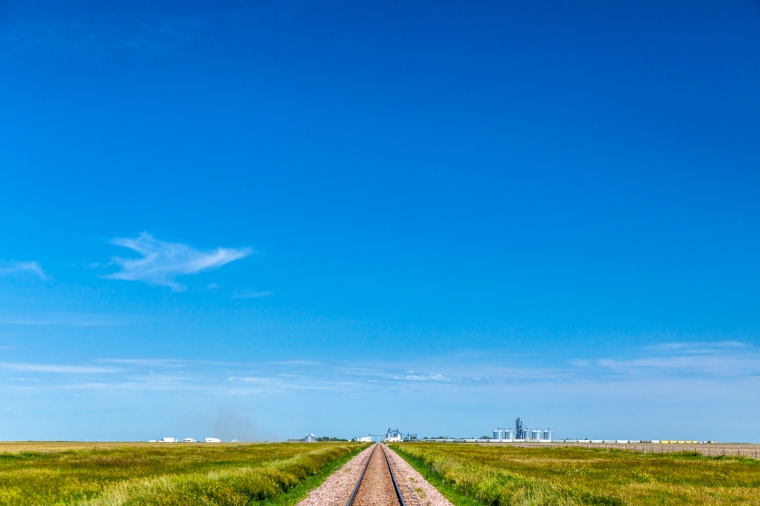 The low point of view with the camera looking up makes the sky prominent.

The placement of a horizon line cues the viewer to the primary subject matter.

Again, with the horizon in the middle of the frame, the elements are equally weighted and the “message” is unclear. Is this about the sky or the water? If both, the viewer’s attention shifts back and forth top to bottom. The composition is static and the message is diffused rather than focused.

Here, the image and its message are focused. It’s about the sky because more of it is showing.

Because more weight is given to the water, it’s clear that the image and its message is about the sunlight on the water.

The illusion of depth can also be established by the placement of people—or objects of known size—farther away on the vanishing line. Notice the engine in the back to the left. The large object shown small indicates great depth.

One’s personal perspective involves two factors—where we stand and how we regard what we see or experience from that point of view. In the first instance, the human viewpoint or perspective, unlike a camera that has a single and objective “eye, is entirely subjective. We don’t see the objective world. Instead, the body experiences sensations of the physical world and the brain-nervous system interprets them according to a complex of inherited beliefs, perspectives, and opinions which continually evolve with experience and education.

No two human beings stand in the same place, not even identical twins. Every point of view is unique. And it has been my observation and experience, that this is the fundamental challenge of communication—sharing our personal reality, what we think we know, believe, feel, and experience with others, and defending it when we want our way or need to be understood. It’s really difficult, in part, because words and how they’re expressed can carry a multitude of meanings. When communication works it’s grand, we say the person or group “gets” where we’re coming from, our point of view, even if they see things differently. When it doesn’t work, when our perspective is out of alignment with someone, it can be frustrating or discouraging, even have dire consequences—as when a doctor and parent have different perspectives on how to treat a child’s serious illness.

The other component of personal perspective is how we regard what we see or experience from our point of view. We don’t just experience the world, we make judgments about it based on where we stand and how we feel about a situation. We’re comfortable as long as there’s social agreement, consensus on a particular reality. For instance, we all know what a knife is. But the word “knife” is not the thing, it’s a symbol of the thing. Someone in the deep past vocalized a sound to describe a sharp object used for cutting, and others adopted the sound—“knife”—to describe similar cutting tools. But while there’s agreement on what an object is, there can be great disparity relative to its use. For instance, a sous chef and a physicist differ in how they see the same kind of object. The chef regards his knife as an object that has dimensions, weight, balance, thickness, durability, and a very sharp cutting edge. The physicist, however, views a knife as an arrangement of compounded elements wherein every atom is 99.999999999999% space. Thus the adage on perspective: “If all you have is a hammer, everything looks like a nail.”

Given that perspectives are constituted of beliefs and experiences that differ, sometimes dramatically, how can we ever agree on a collective level?

Researching this question, I found an article where Dee Hock, founder and former CEO of Visa credit cards, was interviewed, and it resonated. To my mind, his perspectives on business leadership easily applied to the governing of society as well. After saying “the heart and soul of every organization is purpose and principles,” he went on to define them.

“A purpose is not an objective, it’s not a mission statement—a purpose is an unambiguous expression of that which people jointly wish to become. And a principle is not a platitude—it is a fundamental belief about how you intend to conduct yourself in pursuit of that purpose. You have to get very precise about these things. If the purpose and principles are constructive and healthy, then your organization… will release the human spirit and will be constructive of the biosphere.

I believe that purpose and principle, clearly understood and articulated, and commonly shared, are the genetic code of any healthy organization.  To the degree that you hold purpose and principle in common among you, you can dispense with command and control. People will know how to behave in accordance with them… and the organization will become a vital, living set of beliefs.

Once you get a group of people who really begin to understand this, then energy, excitement, and enthusiasm literally explode out of them—they know what to do.”

It’s Mr. Hock’s first sentence that hooked me: “A purpose is an unambiguous expression of that which people jointly wish to become.” I’m reminded of the American presidents—whom you can choose to name—who continuously called us to higher aspiration and identified us as champions of virtue. Applied to upcoming candidates for public office, it’d be wonderful to hear they articulate their vision of who we wish to become. Equally important, would be to see a candidate living the virtues they put forward. Good leaders, like good teachers, lead and teach best by modeling their purpose and principles, not just talking them.

We each have a valid and important perspective on what is. And to the extent that we can acknowledge the partiality of this perspective, what we say stays clear and true.