Outside and above the biosphere there is a field of mind. 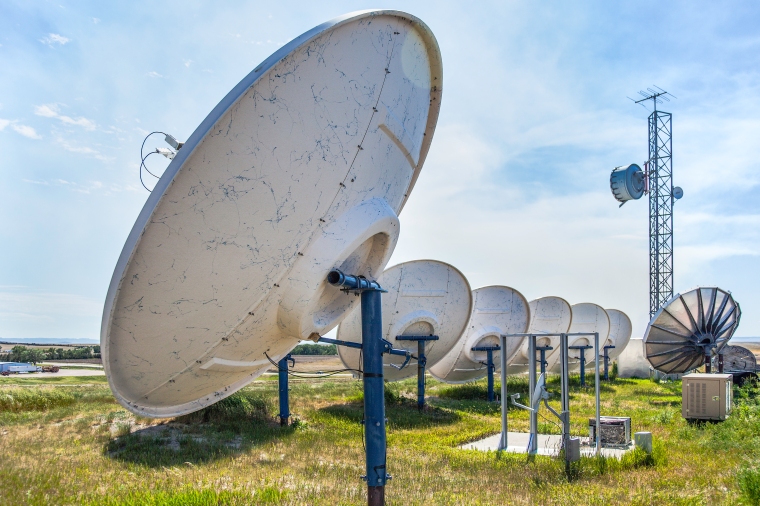 ”Because satellite dishes look skyward, I sometimes imagine lines of light, like coherent laser beams, streaming out of them toward their satellites. If those beams could somehow become visible at night, globally and simultaneously, the resulting web of crisscrossing lines and waves would be dazzling, testimony to humanity’s hunger to relate and learn.

The invisible energies that radiate from worldwide microwave, radio, cellphone and television towers, including satellite transmissions and cable and fiberoptic lines combine to form a global communications “structure.” Several decades before this structure explosed in scope and complexity, French Jesuit and paleontologist Pierre Teilhard de Chardin wrote about a “Noosphere,”  literally a “sphere of mind” that encompasses the Earth like the atmosphere. The term was actually coined much  earlier by Vladimir Vernadsky, a Russian biochemist, to describe an emerging state of the biosphere where “scientific reasoning” would eventually prevail. Teilhard took an entirely different approach, attributing the term to a naturally evolving consciousness that increases with increasing complexity.

In his view, as social systems such as law, government, education, religion and commerce become more complex and their members interact and become more linked and self-aware, their collective thought will tend toward ever greater organization, personalization and unification—patterns he recognized in biological evolution as adaptations for survival.

Centuries ago, the ancient Rishis, Vedic sages in Indian culture, spoke of “Akasha” in Sanskrit as a subtle, all-encompassing medium that underlies all things and becomes all things. In the New Testament, evangelists Luke (12:7) and Matthew (10:30) spoke about everything being recorded, “Even the very hairs of my head are numbered.” In modern times, Madam H.P. Blavastsky (1831-1891) a clairvoyant founder of the theosophical society, spoke of the Akashic records as a non-physical library of every human and non-human event, thought, word, emotion and intent ever to have occurred in the past, present, or future—throughout the universe.  Edgar Casey, “the sleeping prophet,” claimed the Akashic records was one of his sources. So also, the philosopher of science Rudolf Steiner, who wrote about the lost continents of Atlantis and Lemuria.

In modern science, Nikola Tesla observed that an “original medium” that fills space was like the Akasha, “a light-carrying ether.” He considered that medium to be a force field that becomes matter when Prana, cosmic energy, acts on it, and when the action ceases, matter vanishes and returns to Akasha.

Irvin Laszlo, author of Science and the Akashic Field, says “Scientists now realize that space is not empty, and what is call the “quantum vacuum” is in fact a cosmic plenum, a fundamental medium that recalls the concept of Akasha.” He goes on to say, “In the next development of science, the A-field (Akasha) will join the currently known universal fields: the G-field (gravity), the EM-field (electromagnetic), the Higgs (bozon) field, and the locally effective but universally present strong and weak nuclear fields.”

Consistent in these writings about the Akashic “record” is the notion that we not only contribute to the Akashic record by every thought, word and deed, through meditative processes we can access information and inspiration from it. A computer library  such as a “cloud” is an apt metaphor in this regard.

The image of the satellite farm prompted me, not only to consider the evolving noosphere as an Akashic field, but also to think about the content we’re feeding into it. What are we communicating? What are we saying—to and about each other? How are we talking about and depicting human nature itself? What is our contribution to life? Are our acts and conversations contributions to love or fear?

What’s on our minds? What do we value? What are we teaching the next generation? Is the increasing capacity to communicate easier, better, faster and farther making life more enriching for many more people? What should we be talking about? What kind of future are we shaping by our words and images? And what intentions, acts, words, information and thoughts am I contributing to the Akashic record? Rhetorical questions all, but important ones to consider.

Gregory Bateson defined information as “A difference that makes a difference.” Whatever the medium, are our connections—personally and socially—making a positive difference? Are they facilitating and empowering individuals to identify and realize more of their potentials? Relate better? Solve difficult challenges? Repair breakdowns? Are they positively affecting the health and well-being and reproductive success of the species? Responses to such questions point to the direction of communication’s evolution, the evolution of consciousness.

Standing back far enough to let the content of our communication blur for a moment, and fast forwarding, factoring in the rate of communication technology change, I observe a dynamic and unified global communication system already performing functions identical to those of the human nervous system—sensing, interpreting and activating the body (humanity) to respond to change appropriately, that is, toward the health and well-being of all its members. From the science of living systems we learned that when the individual members of a society are functioning well, the whole performs well. It’s also the lesson of the Coronavirus pandemic.

Although it has been many years since I worked in broadcast television, production technologies and media facilities such as television and radio stations, satellite trucks, and farms still get my heart pounding. In them I see the enormous, barely tapped opportunity they have to lift the spirit, empower, inspire and facilitate the realization of human potential.

I believe Teilhard’s grand vision of our collective consciousness moving in the direction of divine realization can be realized—if whatever the issue, we find its resolution in acts of love rather than fear. I offer THIS LINK as a demonstration of that.

A glow ripples outward from the first spark of conscious reflection. The point of ignition grows larger. The fire spreads in ever widening circles ’till finally the whole planet is covered with incandescence. Much more coherent and just as extensive as any preceding layer, the ‘thinking layer,’ which, since its germination at the end of the Tertiary period, has spread over and above the world of plants and animals. In other words, outside and above the biosphere there is a noosphere.

Readings on the topics of dark matter, dark energy and zero point gravity prompted my desire to photographically represent or evoke an awareness of the many forces and energies that we can’t see with our eyes. When I read that “Space is not nothing,” that it’s a “Seething maelstrom of subatomic particles,” and that the composition of the universe is 73% dark energy, 23% dark matter and only 4% atoms, which combine to make hard matter, I wanted somehow to represent this with my camera.

The challenge was how to photograph the invisible. I was stalled, thinking about this for months. And then, typically, a conversation with Linda revealed a way to proceed. She proposed that, rather than showing the lines of force (which I was thinking I might physically need to draw on photographs), I could suggest them by their relationship to the land and other Earth objects. She noted that some of my images already did this. (For instance, Solitude, the image featured in my blog entitled “Attitude.”

The very next day I was out with my camera shooting tests. Since only 4% of the universe is constituted of matter, I decided to include approximately only that much subject matter in the frame. The rest would be either blank, a continuous field of color or texture or blank sky. It worked. For me at least.

I went to the computer and searched for a destination where I could find immensities of land, sky or water. On Google Earth I found what I was looking for. (The little “man” icon that can be dragged to any street to see what’s there was particularly helpful). The Northern Plains of South Dakota and Nebraska had “oceans” of wheat fields, fascinating peaks in the Badlands and wide open skies. Using Map Quest I found lodging facilities that I could reach within a day and still be close to the areas where I wanted to photograph the next morning.

I chose to visit this area at a time when the wheat was knee-high and turning golden. I photographed for a week, early morning until and sometimes after dark. I was in the flow, ecstatic every day. I hadn’t realized that there would be so little traffic. Frequently, I set up my tripod in the middle of a highway and shot with a 4×5 view camera without a single vehicle passing by. I could drive thirty or forty miles down county roads and not see another car or human being. In many places there were neither fences nor phone poles. And I’d never seen so much wildlife.

This photograph was made at the end of a day, behind the motel where I was staying. It’s an example of an image that evokes a sense of invisible forces, in this case, television and microwaves. Many of these photographs are in my portfolio, and I published two Blurb monographs featuring photographs of “The Northern Plains.”

One thought on “The Noosphere”