It’s a vaccine against lies, disinformation and conspiracy theories. 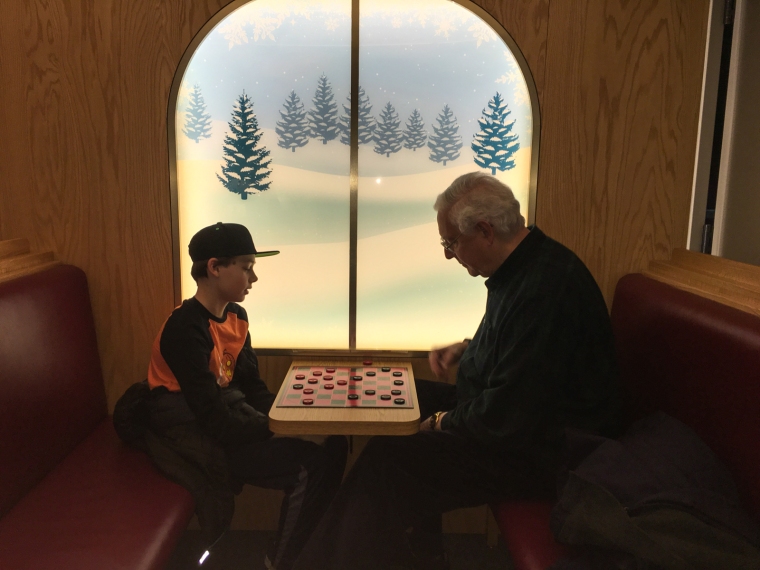 My grandson, Ethan Miller, and I face off in a heady game of checkers.

In an era when untruths have been proliferating across platforms in the form of disinformation, misinformation, fake news, lies and conspiracy theories, it’s refreshing and hope-inducing to know that there’s a vaccine against the easy acceptance of what’s heard, seen or read. It’s called “critical thinking,” and it’s currently being taught in select schools, K through college.

I say “select” because some schools include it and many don’t. It’s a gap that’s decades-long, in part because “teaching to the test” took up so much of the curriculum there wasn’t time to add a class or teach critical thinking skills in the context of existing classes. Consequently, students that lack critical thinking skills remain susceptible to falsehoods, disinformation and conspiracy theories throughout their lives.

The critical thinking gap is one of the most significant, yet overlooked equity challenges in education today. — Colin Seale, author, “Thinking Like A Lawyer: A Framework for Teaching Critical Thinking to All Students.”

Frank Breslin, a retired high-school teacher in the New Jersey public school system, writes in a Huffington Post article, Why High Schools Don’t Teach Critical Thinking — “State education departments mandate that so much material has to be covered that critical thinking cannot be taught, nor can the courses themselves be critically presented. To cover the curriculum, courses must be taught quickly, superficially, and uncritically, the infallible way of boring students… It leaves students with the mistaken impression that there is little if any disagreement among scholars about what they are taught, as though what is presented is self-evident truth… Because students are usually taught only one viewpoint about everything, they simply accept the theory they learn on their teacher’s authority with perhaps little understanding of the reasons provided… The essence of an education—the ability to think critically and protect oneself from falsehood and lies—may once have been taught in American schools, but, with few exceptions, is today a lost art.”

According to the Cambridge Dictionary, critical thinking is “The process of thinking carefully about a subject or idea, without allowing feelings or opinions to affect you.”

Critical thinking wards against the immediate acceptance or judgment of an idea, opinion, event, policy, perspective or phenomenon, political philosophy or religious ideology, irrespective of the presenter or source.

It’s necessary because there are many people who, purposefully or not, and for a variety of reasons, tell and disseminate falsehoods. In part, we’re experiencing an “uncivil war” because the preponderance of our educational systems have been teaching students what to think rather than how to think—

To question whatever they read, and never to accept any claim blindly; to suspend judgment until they’ve heard all sides of a question, and interrogate whatever claims to be true, since the truth can withstand any scrutiny. Critical thinking is life’s indispensable survival skill, compared to which everything else is an educational frill! — Frank Breslin, retired high school teacher.

Critical thinking (CT) promotes attentiveness, a habit of inquiry, self-confidence, courage, open-mindedness, willingness to suspend judgment, trust in reason, evidence-based beliefs, and  the desire to know the truth. By stepping back to look at an idea or situation from different perspectives, we gain an understanding and empathy for how other people think and decide. CT provides reasoning skills that form the basis of history, science and mathematics. It promotes democratic citizenship, which requires the ability to observe carefully and check emotions and prejudices before jumping to erroneous conclusions. It prevents baseless assumptions and prejudging, increases awareness of who and how language is being used and looks for both causes and consequences. Essentially, it’s a thought process that seeks the truth.

“Critical thinking is the intellectually disciplined process of actively and skillfully conceptualizing, applying, analyzing, synthesizing, and/or evaluating information gathered from, or generated by, observation, experience, reflection, reasoning, or communication, as a guide to belief and action.”  (Foundation for Critical Thinking) The following are specific skills that are developed in thinking critically.

Active rather than passive thinking

Critical thinking is about being an active learner, a discover or wonderer, rather than a passive recipient of information. Critical thinkers want more information before accepting something as real or true. They question everything. How do you know that? What’s your source? Where’d you hear that? What’s it based on? What are the other possibilities? How can we make it better? If it sounds too good to be true, it probably is. If it sounds outrageous, beyond reason, it probably isn’t true. And if it’s out-of-character for someone, it needs to be investigated. Intuitions like these constitute “red flags,” signaling that critical thinking is required.

Among human beings, truth is almost never one thing and it’s never absolute, that is, holding for everyone, all the time everywhere. In pursuit of the truth, an open-minded person is willing to consider ideas and opinions that are new or different from their own, even to the extent of modifying or completely changing their point-of-view. This is commonplace for scientists, the foundation of scientific inquiry. And it’s what we expect in lawyers, judges, politicians and the criminal justice system.

It’s easy to accept something as true or factual, especially when it comes from an authority figure or someone we know and respect. But no one is infallible and we all tend to  diminish, embellish or exaggerate, often to persuade, enhance the telling of a story, to telegraph that “I know something you don’t know” or to be seen as part of the in-the-know crowd. Reserving judgment on whatever is presented to us, gives us time to find or allow more information to either affirm or refute what’s been said, shown or written.

In whole-systems terms, more information increases the resilience of a system’s functioning. The same applies to discovering the truth. As we gain information about an idea, event, theory or circumstance, the reality becomes more clear. Typically, this is done through question and answer interactions, the more and more diverse the people the better. As we know from police and detective movies, to prove that something is true, there has to be  evidence—indisputable facts.

Credible sources are those that are credentialed to have direct knowledge and extensive experience with the subject or viewpoint we’re researching. Because we don’t have ready access to professionals on many issues, we go to the Internet and Google a question. Of the options presented there, critical thinkers will pay close attention to the source, indicated in the green URL address under the topic heading.

After the https:// designator is the source’s name, many of which are advertisers, publishers, information services such as Wikipedia, Linked In, Facebook and dictionaries. These are “Tertiary Sources.” They present summaries or condensed versions of materials, usually with reference to other sources. “Secondary Sources” are accounts written after the fact with the benefit of hindsight. They are interpretations and evaluations of primary sources. Secondary sources are not evidence, but rather a commentary on and discussion of evidence. “Primary Sources” are firsthand documents that provide direct evidence on your topic. (Sotheby’s Institute of Art).

We wouldn’t go to a carpenter next door to heal a toothache. Neither would we consult a dentist about creating a will. Edutopia, George Lucas’s educational foundation posted some very nice guidelines to help students evaluate sources on the Internet—

Especially, I look for an answer to the second question—What’s in it for the source? How they benefit from your visit? As noted, I  give more credence to individuals who have direct knowledge and extensive experience with the subject or viewpoint being researched.

When to our satisfaction the facts are in, we apply logic, a method of reasoning that involves a series of statements, where the truth follows from preceding statements that are all true. For example—

I have a dog named Fluffy.

Therefore, Fluffy is my best friend.

The conclusion is false, not logical, on two counts: Not all men consider dogs to be their best friend. And most “best friends” are persons, not animals. Another—

Where there’s a gun in the house there’s the potential for harm.

We have a gun in the house.

Therefore, harm could come to someone in my house.

The conclusion is logical, true because the statements that precede it are true.

This didn’t turn up in my research on critical thinking, but it deserves serious consideration. The  ideas, theories and perspectives we accept shape our life and the lives of those around us and the world.

Hypothetically, I move to a new town and am invited to the home of an acquaintance to watch a football game with his friends. In short order, the group tries to convince me that the moon landing was a hoax. They tell how the government, in cahoots with a movie producer, pulled it off as part of a scheme to beat the Russians to the moon. Another says that big corporations were in on it, reaping enormous profits on ancillary sales. They offer no evidence, but the ideas they present are many and they sound plausible. Driving home, if I take what they said somewhat seriously, the first step in my thinking process would be to apply a brief litmus test to see if their perspective would warrant some investigation. If I adopt their point-of-view —

If the answers indicate that adoption would be generally uplifting, enriching and good for my mental health I’d begin to take the next step—gather some facts.

At Woburn High School in Boston, 60 new classes were added to teach critical thinking. Jeff Landers, CEO of Mind Edges Inc., an educational technology company that reviewed the system, concluded that “Critical thinking should be integrated into every course in every high school.”

Jason Singer, Principal at Kipp King Collegiate High School, San Lorenzo, California said “Our theory is that critical thinking wins the day.” CT is integrated throughout the curriculum, in a school that’s 85% African American and Latino. One of the students said, “To me, critical thinking means thinking beyond what you hear.” Jared Kushida, who teaches global politics, encourages the flow of questions. “I rarely go on for more than 30 seconds without asking a question, and I rarely stop at that one question.”

The Foundation for Critical Thinking is a comprehensive resource offering programs, conferences, events, media and materials to educators from the 3rd Grade on, including the institutions of science and engineering, business, health systems and homeschooling. It’s a “primary” source that offers on-line courses, guided study groups, webcasts and more. It’s a wealth of information. And there’s no charge.

Critical thinking takes time, of course. It’s so much easier to accept someone’s word or perception, especially if the issue generates heat and is in alignment with a group that invites us in. Trouble is, we act and promote what we believe. And it escalates. Personally, we start living the lie or unproven theory. And socially, these can build into a consensus reality where numbers of people will act on it. The raid on the U. S. Capitol building is a prime example of violent actions precipitated by false information and erroneous beliefs. By taking the time to think critically, the realities we create will be based on facts, on the truth. And when that happens, both the universe and our soul will support it.

I welcome your comments at <smithdl@fuse.net>