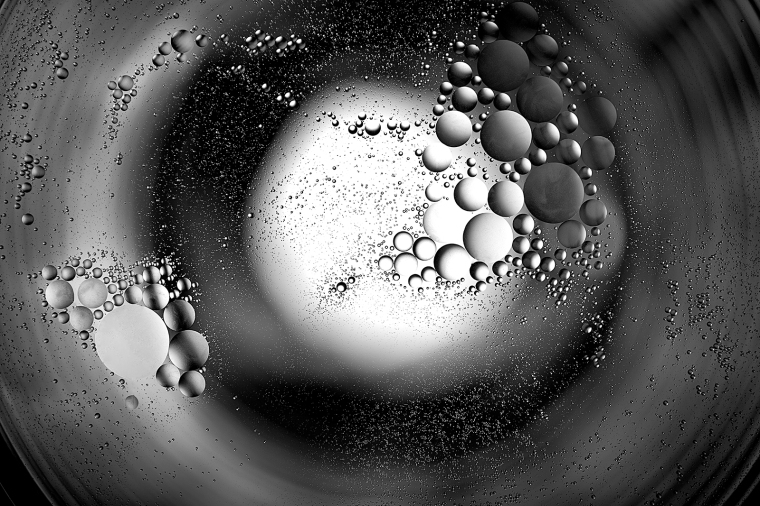 In whole-systems parlance, ordering specifies the arrangement of parts. Coherence is the adhering property of those parts, the quality that forms a unified whole. In mechanical systems, their design creates functional relationships that unify the parts. In living systems, the “glue” holding their members together is the desire or intention to connect, to unite. When architect, systems theorist, inventor and futurist Buckminster Fuller noted that “Love is metaphysical gravity,” he postulated that love is the universal cohering agent, attracting and holding everything together.

When the above image was made, I could see the force of attraction operating within and between the spheres of oil as they sought to establish their proper size, shape and location in relation to the spheres around them on the surface of a jar water. Working out their shape and relationships was dynamic, a continuous process of adapting to change among the cells as the surface moved. In time, the system reached homeostasis. Rest. In living systems, the quest for identity, right relationships and making appropriate adjustments to change never ends; homeostasis is equivalent to death. Instead, the urge toward coherence—as the song says: “Finding love in all the right places…”—diminishes the urgency and intensity of conflict, and promotes a level of comfort, confidence, balance and peace. So it is with all living systems—cells, plants, animals, persons, nations and the earth. Fragmentation is incoherence.

Coherence is in evidence everywhere. In medical science, it’s viewed as a highly efficient physical state in which the body’s nervous system, cardiovascular, hormonal and immune systems are all working efficiently and harmoniously as one—considered by physicians as the highest level of physical functioning.

When the body is coherent, its immune system is strong and resistant to disease. Everything we do either promotes or counters coherence and thus our and our environment’s evolution and development; it is either healthy or unhealthy, and is either constructive or destructive.

In physics, coherence describes properties of correlation between physical quantities of a single wave, several waves or wave packets. For instance, two wave sources are said to be perfectly “coherent”—resonant, lined up—when their frequency and waveforms are in step. In literature, writers of fiction and non-fiction aspire to coherence, the harmonizing of a story or message that unifies a piece through the use of theme or organization. When the writing is coherent, there’s integrity, everything holds together. It makes sense as a whole.

In psychology, coherence occurs when aspects of personality are in tune through increased awareness. Coherence represents the extent of unity and wholeness within the individual.

When our emotions and mind are brought into coherent alignment with the heart, our brain and heart are operating in a synergetic way. We then experience a deeper intuitive inner guidance. In other words, heart intelligence can be defined as the ability of our heart to sync all of the systems of our body to bring a higher state of awareness, and to bring more clarity and focus to our lives.

The HeartMath Institute considers the heart to be “Our inner guide and the key to help us find our purpose in life.”

In religion, faith is the agent that binds followers to a particular tradition. In Catholicism it’s codified in a set of beliefs professed in the “Apostle’s Creed.” Judaism’s fundamental beliefs are contained in the Torah, which prescribes 613 commandments codified in Rambam’s 13 Principles of Jewish Faith. Buddhists find moral cohesion in the practice of compassion and mind-disciplining precepts and the Buddha’s “The Eightfold Path.” For many years, His Holiness The Dalai Lama has been a leader in building coherence between science and spirituality. In the Sufi tradition, coherence is considered an aspect of the Divine Reality. As an aspiration the members intend to embody, it offers specific practices and ceremonies of coherence that include meditation.

Love is the ultimate state of coherence because it unifies the individual with the ultimate reality of the field of existence. Negative states such as fear, resentment, arrogance, and selfishness represent a disordering of the field. These negative states lead to disharmony in our relationships and, finally, leave us at war with ourselves. Coherence is disturbed by egoistic self-assertion. The humility that love engenders is a divine attribute, erasing the distorting forces of egoism. Practically speaking, love is a magnetism of the heart that engenders a coherent ordering of all our human faculties.

In her book, Coherent Self, Coherent World, Diana Durham notes that a profoundly negative belief about one’s self can easily turn a person into an addict—“Someone who abuses something in order to try to ease an addiction. In the case of the gunman, the addiction has to do with power. He feels powerless, and to make up for it, tries to control others through violence and the power of the gun… The problem is the more he fishes (acts out), the more wounded he becomes. The more an alcoholic reaches for a drink to make him feel good, the more he needs it. The more we need other people to validate us, the more violent we will become in our attempts to control them.” Money, fame, drugs, friends. They can easily become distractions. “The more we need them, the greater the risks we will take to achieve our ambitions. When we disconnect from our inner self we feel partial, empty, powerless. To compensate, we go fishing to try and fill the void… We pinch ourselves off from the force of love when we harbour beliefs that are discordant to its frequency.” The remedy then is to transform negative beliefs into positive with the realization that, by virtue of the soul, we are all made in the image and likeness of Love. Turning within, we become coherent with others and the world.

Love, the affinity of being for being, is indeed a magnetic and mysterious force. Like oxygen, it’s only known through experience—a tender stirring in the heart and the deep knowing of the soul.  The quality of experience within all living systems above the individual  ,depends on the relative coherence of the person’s body, mind and soul—how well they are attuned, integrated as a whole toward realizing ones purpose. The Coronavirus has us all living in a bubble—literally. But like the multitude of bubbles in the image above, the drive to cohere—within us and beyond us—calls for adjustment, reassessing our personal and social identity, creating new ways to relate, reexamining our values and resetting our priorities.

Underlying the stresses of the current era, whether from medical, economic, social or political sources we can take to heart what John F. Kennedy proclaimed before the Canadian Parliament, “What unites us is far greater than what divides us.” Irrespective of time and culture, what unites us, the glue that holds us together, whether we know it or not, is the love that we are—and are compelled to share. Viewed as part of the evolutionary process, we’re in an era characterized by formidable rapids. Again, referencing the photograph, the sooner we each take responsibility—appropriate action—for the stresses, the sooner we’ll enter the calmer water. And be whole.

I welcome your comments at <smithdl@fuse.net>