This posting begins a series that will focus on the aesthetic tools that visual artists and others use, singly and in combination, to create still and moving images that accomplish specific communication objectives.

Knowing the purpose of an image before we pick up a camera can help us select the most appropriate visual tool—or combination—to maximize its effectiveness. While examples of the aesthetic dimensions are illustrated on web sites and discussed in “How-to” art books, they generally don’t make the connection to either expressive objectives or communication strategies.

Photography provides a way of relating to the world in ways that are more conscious and engaging. In order to apply image-making to these ends and accomplish specific objectives, there are some fundamental questions to consider. Why am I photographing? What subject matter and locations interest or attract me? And what are my aesthetic preferences? It’s the latter question that prompts this series.

Being aware of what’s in the aesthetic toolkit as we photograph, and then analyze the results, clarifies our preferences. And that’s how we develop an “eye,” the ability to consistently produce images that successfully accomplish their objective. For me, in the process of wanting to make photographs that would feed my soul, I discovered that it was Simplicity, Exquisite  Light and Sacred Geometry that, singly or in combination, more often accomplished that objective.

In studying healthy people, psychologist, Abraham Maslow, expanded his “hierarchy of needs” to include “Transcendence” and “Self-actualization” at the top of his pyramid. Just below these, he situated and described “Aesthetic needs, the appreciation and search for beauty, balance, and form.” Taken together, this series amounts to an abbreviated course in visual communication and aesthetics.

If you’re serious about developing an “eye,” you could list the titles for reference, perhaps even copy and paste the descriptions to have at hand. Then, as you experience these dimensions in your image-making, by noticing which of them holds the greatest appeal, you’ll be able to narrow and specify your preferences and work more consciously with them.

In addition to the information relating to the aesthetic tools and how best to use them toward accomplishing an objective, I will include contemplations or reflections on their personal and social significance.

The Aesthetic Of Abstraction

A way to rivet attention

The universe is constantly moving in the direction of higher evolutionary impulses, creativity, abstraction, and meaning. — Deepak Chopra, Indian-American author

Artists and visual communicators use abstraction as a way to capture and hold attention. Subject matter that’s abstracted may not be readily identified, so viewers sometimes have to linger a while with an image in order to understand what they are seeing and why the artist chose to present it in a frame. Is there some meaning here, or is it just a pleasing image?

Abstract image-making is generally a process of inductive formulation, putting together particular elements to form a general statement or impression. Visual “elements” can be anything—objects, lines, patterns of light or darkness. Anything that attracts the eye.

When an image is unconcerned with literal depiction, it’s regarded as “abstract.” Whereas abstractions bear some resemblance to the real world, abstract works are free from it. I’m reminded of a Steve Martin movie where, confronted with a purely abstract sculpture, he says with a lilting voice, “What kinda deal is that?”

As an aesthetic dimension, abstraction tends to invite the viewer to make a connection to the real world—and thereby make generalizations. On the other hand, abstract images more often hide the artist’s intent and in the process create cognitive dissonance, challenging viewers to try and understand what they are seeing. The meaning of such images, if there is one, can be suggested by a title, explanation, or artist’s statement.

Abstraction demands more from me than realism. Instead of reproducing something outside of me, now I go inward and use everything I’ve learned thus far in my life. — Susan Avishai, artist

Water reflecting on the hull of a boat

In photography, abstraction is is an excellent tool to use when the objective is to capture and hold the viewer’s attention longer than if the subject could easily be identified. This is particularly the case when the photographer wants to challenge viewers to work a little harder to identify the subject and its meaning or significance. Because abstraction is largely a matter of minimizing easily recognizable features, it’s not good at providing information.

Psychologist Carl Jung wrote about abstract thinking, feeling, sensation, and intuition. In each instance, he said the process is inductive, requiring the rational-logical mind to assimilate and process particulars in order to reach a more comprehensive understanding or feeling. In whole-systems terms, it’s the relating of parts within a whole, ordering them in ways that produce a concept, picture, or sensation of the whole. Inductive process is higher order thinking, because it synthesizes a whole greater than the sum of its parts.

The same is true in social relations as an organizing principle. In Nation Formation: Towards a Theory of Abstract Community, Paul W. James argues that “A nation is an abstract community bringing together strangers who will never meet, resulting in real but abstracted and mediated relations—as opposed to personal relations.” At election time the American social climate becomes supersaturated with abstract labels such as “liberals,” “conservatives,” Democrats,” “Republicans,” “nationalism,” “democracy,” “socialism.” If asked, twenty people in separate rooms would provide twenty different opinions on what these abstract words mean.

Even the guiding principles of the United States Constitution are expressed in abstractions—purposefully, to allow for interpretation—which ensures vigorous debate. Generalities such as “liberty,” “freedom,” “justice,” “welfare,” “prosperity,” “militia” are polarizing because we don’t have a common understanding of their particular meanings. Politicians use abstract terms to gain votes and pass legislation. Words like “jobs,” “civility,” “great,” and “integrity” are never defined, leaving the context—and too often the attitude—for us to create meaning.

Consider the word “integrity.” Adolph Hitler could be regarded by some as a man of integrity. He was totally committed to his vision for Germany, and he remained true to that vision until the end. It matters greatly, what one has integrity to.

Considering the importance of communicating with a common understanding of meaning, one of the great contributions that journalists could make would be to require politicians and other interviewees to define their terms, be clear about what they mean—specifically.

Pay attention to minute particulars. Take care of the little ones. Generalization and abstraction are the pleas of the hypocrite, scoundrel, and knave. — William Blake 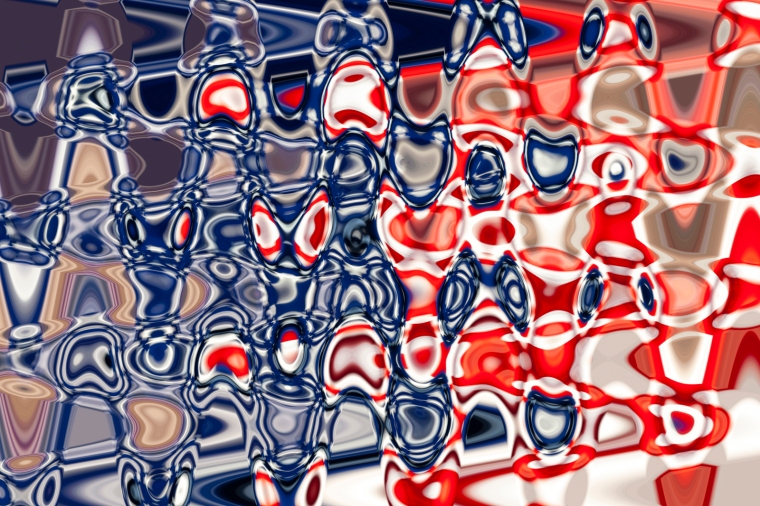 Abstraction of an American flag

Systemically speaking, the whole organizes its parts. That’s what a Constitution does for a nation. With that in hand, it’s incumbent upon the parts—“members” in a living system—to function simultaneously on two levels: self and others. That is, to continuously maintain individual health and functionality, while supporting the health and functionality of the whole.

The purpose of abstraction is not to be vague, but to create a new semantic level in which one can be absolutely precise. — Edsger Dijkstra, artist

Photography Monographs. The pages can be turned in each book.