One of the differences between mediocrity and excellence

In addition to the quiet sensibility that this image evokes in me, it speaks to the human journey, our quest for meaning and purpose, even our individual place and function in the world as we paddle this way and that with attention focused mainly on the surface of things.

Quantum theorists observe that, at the level of quanta, consciousness—thought—directs and influences the outcome of that which is sought in research experiments. Until a researcher looks  for a particular sub-atomic particle, it can occupy two different places at the same time. And then it only shows up where she looks. Might the same be true at the human level? Could our surface realities be reflections of underlying expectations in consciousness?

In this regard, I recently noticed a sharp contrast between the experience of two grocery stores. In one the employees were bored and unhappy, preferring to engage each other in gossip and playful banter while halfheartedly waiting on customers. Perhaps reflecting the scattered consciousness of the manager—or the other employees—the store was messy and cluttered. And the atmosphere was stressful.

In the other store, the employees were pleasant, doing their jobs, responding to customer’s questions and looking people in the eye. A new employee went and got immediate help to answer my wife’s question about a checking procedure and both she and the manager were courteous. The place was clean and orderly, the atmosphere so inviting and friendly I commented to Linda on the way out about the difference in attitude—consciousness. I think it was the calm sensibility of the above image that prompted my comparison. The water was calm because the men in the rowboat were calm. One reflected the other. Neither of them were rocking the boat.

Beyond the relationship between consciousness and the effects it ripples onto the surface of life, further consideration of this image reminded me of past experiences in a rowboat, the smoothness of oak, the sound of paddles turning in the oarlocks, the pull against the water, the water swishing and dripping off the oars as they were raised, the drops and ripples they make when the paddling stops, and the bumping of wood on wood. Deeper yet, I imagine the voices of the men in the boat, perhaps telling stories about the one that got away, how things used to be or ought to be, sharing memories of great games, players or plays and where to get the best pizza.

Systemically speaking, each and every component and change of tonality within a photograph is considered a visual element. Images with many elements are said to be “complex.” Those with few elements—as is the case here—are “simple.” The way to ascertain the complexity of an image is simply to count the elements. In complex images this can be so daunting this is rarely done. For example, even though the rippling waves on the quiet blue pond used as the header for this blog leans toward simplicity, it has many score elements.

Although aesthetically opposite, simplicity and complexity are neither good nor bad. They serve different purposes. The more complex the image, the more information it provides. The simpler the image, the greater its emotional impact. Generally speaking then, artists favor complexity when the purpose is to provide information and work toward simplicity when the intent is to generate a feeling. Often, the easiest way to increase complexity is simply to shoot wide to include more elements in the frame. Conversely, to favor simplicity closeups eliminate any element that doesn’t contribute to the message or expression.

To illustrate, consider the number of elements in the original image compared to those in the high contrast version. 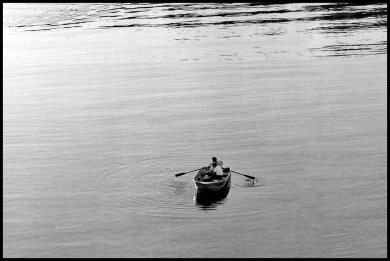 Image simplicity is far more difficult to achieve than complexity. For one thing, backgrounds aren’t usually plain. But because simplicity generates feelings, perhaps because it’s unusual in everyday experience, it can substantially enhance an image’s evocative properties, particularly those conducive to contemplation. That’s not to say that complex images can’t or don’t generate feelings. They certainly do, for example photographs made on the battlefield or images of babies and animals. I’m just addressing a general aesthetic principle, a technique to be aware of when photographing.

The original photograph, as shot, was flat and muddy-looking. Nonetheless, the principle element showed promise, so I made a copy of it by printing the negative in contact with a sheet of 4×5 Kodalith Ortho film. The result was a film “positive” that contained only deep blacks and clear white. No mid-tones.

There were some pinholes and other little spots in the lake and other background areas on the positive, so I opaqued them out using Kodak’s red opaque medium. From this film positive I made a negative (in the same way) and opaqued out everything but the rowboat, men, oars and the rippling water. From that negative I made the prints.

Today it’s easier and faster by far to create this type of high contrast image digitally. Using Photoshop, on the toolbar at the top of a page that displays the image, click on Image > Adjustment > Threshold. The “threshold” command converts color and grayscale images to high-contrast devoid of grays. All pixels lighter than the threshold are converted to white. Those darker, convert to black. The result is an image that is black and white with no mid-tones.

Photography brings what is not visible to the surface. I continue on my way seeking my own truth ever affirming today. When I photograph, I make love. Photography is my passion; the search for truth my obsession.