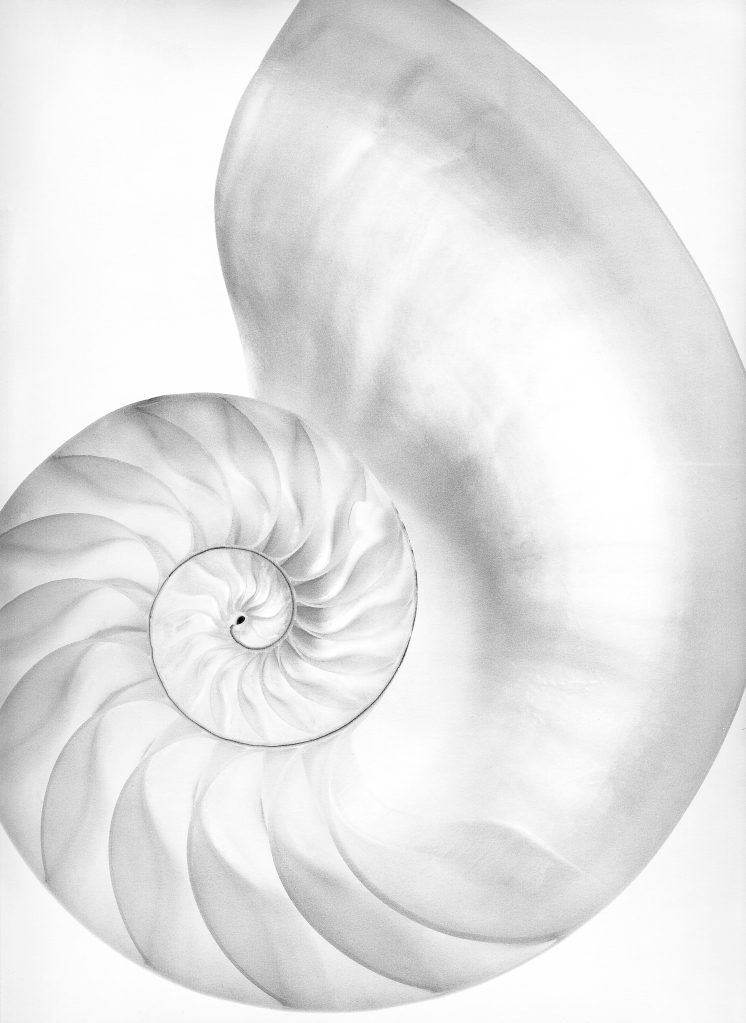 The chambered nautilus is a creature that inhabits the Pacific and Indian oceans, today between depths of 600 to 1200 feet. Appearing in the fossil record before fish, dinosaurs and mammals some 500 million years ago, they grew up to 20 feet long! The spiral occurs as walls are formed to seal off and make chambers to regulate buoyancy. As displayed here, the image moves me to considerations of human growth, development and beyond.

In the shell’s central spot I see the point of creation and emergence, be it the womb of an individual mother, our Earth Mother or dark energy at the beginning of the universe. It can represent any beginning: the birth of a project, career, a new direction in life or the birth of a nation. With movement, the spiral begins, not as a straight line, but as a curved one. Largely because clocks tick off present moments, we think of time as a straight line between yesterday, today and tomorrow. But indigenous peoples all over the world perceived time as a spiral, repeating periods marked by the regular “journeys” of celestial bodies—gods in their view that were given names and personalities. For instance the ancient Maya—whose calendar was derived solely by observation and is accurate to within decimal points of our own—made detailed charts to indicate what happened in various cycles so the same or similar experiences could be anticipated on the next occurrence of the cycle. Researchers today refer to these periods as “calendar rounds.”

Movement gives rise to form—cells, walls in the nautilus shell, dark matter, stars and galaxies in the cosmos, knowledge in human beings, cities and governing constitutions in nations. Personally, I think of how many different people I have been since I became aware of myself as an individual. Form after form, experience after experience, role upon role, as interests, people and opportunities came and went, my personality, consciousness and priorities evolved. I’ve often said, “On this turn of the spiral…” I see things differently. I no longer believe “X” or want “Y.” With experience and education, the chambers of consciousness and perception widen, become more expansive and inclusive. It’s a process of reaching outward while remaining  connected, grounded perhaps. More boyant. All that came before is not lost, is present still, contributing to the next, more expansive part of “me.” As with everything in nature, growth and development is never a straight line. It’s a spiraling ascent—rounds that come around, providing opportunities to reexamine and do better than repeat.

All evolution is a dance of wholes that separate themselves into parts and parts that join into mutually consistent new wholes. We can see it as a repeating, sequentially spiraling pattern: Unity—Individuation—Competition—Conflict—Negotiation—Resolution—Cooperation—New levels of unity and so on.

I have long been attracted to “high key,” photographic images where the dominant tonalities tend to the light and bright side. The opposite is “low key” where most of the image contains dark or black tones. Although I work in both modalities—and in-between—my aesthetic tends to favor the former.

This shell, a gift from Linda, had a beautiful spectral quality to it. On the outside, the silvery white surface, when held at an angle, revealed a rainbow of colors. Inside, the white quickly graded to deep yellow. To get these dark colors to render in high key, I first set the shell on the light table on my camera stand and positioned photoflood lights on both sides at a rather high angle. That brightened the shell and created a lot of contrast—just what you don’t want for high key. So to get rid of the deep shadows I put diffusion material over both lights. That softened the shadows considerably. Next, using a voltage regulator, I lowered the wattage of the lights so—according to my light meter—they closely matched the luminance of the light table.

With the luminance value of the shell and background fairly matched, the final step was to determine the exposure. For this, I used a standard Kodak Gray Card which has 18% reflectance. Had I taken the reading from either the shell or the light table or both, the film would have registered the full range of tones, black to white, in spite of my lighting efforts. By exposing for 18% gray, the film registered everything as white. Bright. The negative was dark, so in the printing process I could enhance the high key through less exposure to the paper. A little underdevelopment of the film also helped to lower the contrast.

I invite you to visit my portfolio site: David L. Smith Photography