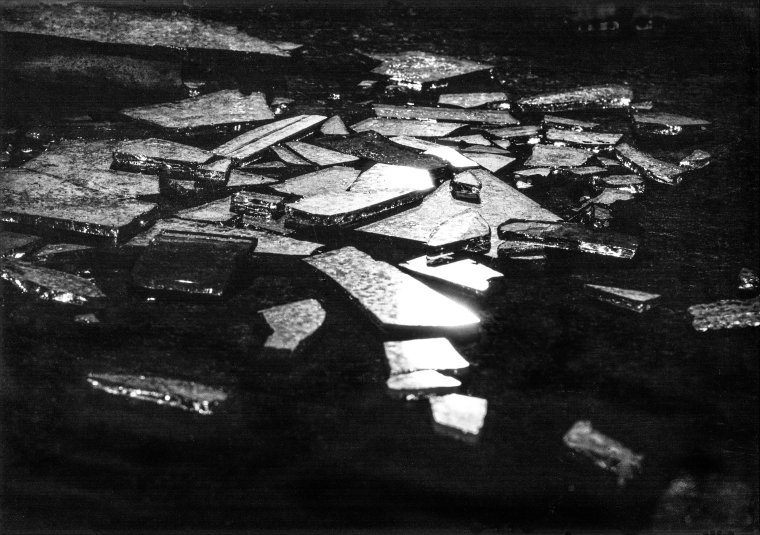 This image has special meaning for me. I was in high school, a new member of the camera club, wandering the streets of downtown Cincinnati at night looking for photographs. A building had recently been demolished at the corner of 5th and Plum Streets and, unlike today where such places are fenced in, I was free to walk around. I  made several exposures of City Hall and the Cathedral in the distance, with beams and mounds of bricks and debris from the demolished building silhouetted in the foreground. The shattered glass on the ground caught my eye and this photograph is the result.

Eight years later I was employed by the television station that had built a new facility on that very spot—the same station where I’d performed on The Dottie Mack Show, as one-third of her special guests, The Pantomime Trio. I was eleven years old. Fast forward several decades and the TV station was replaced by a much larger structure that evolved into the current Duke Energy Convention Center. As if my being attracted to the place where I would be employed as a cinematographer were not enough of a synchronicity, when I took the position of director of the television center at Xavier University, I inherited the lighting grid from that same station—the lights that my sister, a friend and I performed under.

Now, looking at this image, I reflect on the process of change. Buildings are demolished to make way for more, bigger and better structures. Mortar, glass and steel are still used, but in much improved and variable forms. We speak of “positive” and “negative change,” but the labels only apply to us because we are flesh and bone and we have feelings, all of which can easily be hurt. From a much broader perspective, change is evidence of life. And as such, it affirms that life is evolving. Advancing. I wonder about the term “inert,” because nothing qualifies. Throughout and including the universe as we currently know it, nothing stays the same forever. Everything changes. By defining “life” as that which changes, the universe and everything in it is “alive,” a living system.

At the human level, because I think and feel, I have preferences and expectations. I want the changes I experience to satisfy my physical, mental, emotional and spiritual needs and wants. When that happens I’m in my comfort zone, moving forward on the crest of the universal “tide.” On the other hand, when entropy manifests as breakdowns or blocks in these areas of my being, it feels like the universe is not friendly, not cooperating, holding me back or making things difficult. Placing blame is a natural first response. And then I search for reasons. Why is this happening? What does it mean? And then I remember, in themselves breakdowns and blocks are not the cause of my distress or disappointment—they are impersonal events. Just happenings, whatever the cause. It’s my resistance to them that causes confusion, disappointment, dissatisfaction and suffering—not getting my way, things not working they way I want or expect them to. My experience of the difference between one morning when the traffic flows on the expressway, and the next when it’s backed up entirely depends upon my response to it. I can rail against it and look for someone or something to blame. Or I can settle back, observe and allow that this is the way life is moving and wait for the situation to change. What’s “negative” about change is either the perception or the response.

It’s wonderful and inspiring to hear people expressing a desire to create “positive change” or “make a difference in the world” by improving conditions for individuals, systems and societies. I salute them and they give me hope for the future. Equally, I honor and respect those who, by the quiet manner of their courageous living—I think of my dad—the quality of their character or simply their loving presence are affecting change. Mathematician Petru Dumitriu wrote, “If I love the world as it is, I’m already changing it: a first fragment of the world has been changed, and that is my own heart.” What encourages my patience and optimism in the face of negative changes are those three little words—loving the universe “As it is”—constantly loving what is by stepping back, observing and allowing.

Through breakdowns, blocks and disappointments, I want to remember that today’s disaster, however small or large—symbolized here by the shattered glass—will give rise to something better tomorrow. And yes, that too will eventually succumb to entropy. But out of the ashes will come another advance, and another and another as life inexorably moves onward and upward. Life began on this planet about 3.6 billion years ago with self-replicating molecules. That we’re still here and considering how far we’ve come is for me, a source of confidence that life “knows” what it’s doing. My challenge and privilege is to accept it on its own terms.

The only way to make sense out of change is to plunge into it, move with it, and join the dance.

I got down on my knees in order to position the highlights—from a street light—so the glass shards would form a pleasing composition.

I invite you to visit my portfolio site: David L. Smith Photography

And a reminder: My new email address is: smithdl@fuse.net