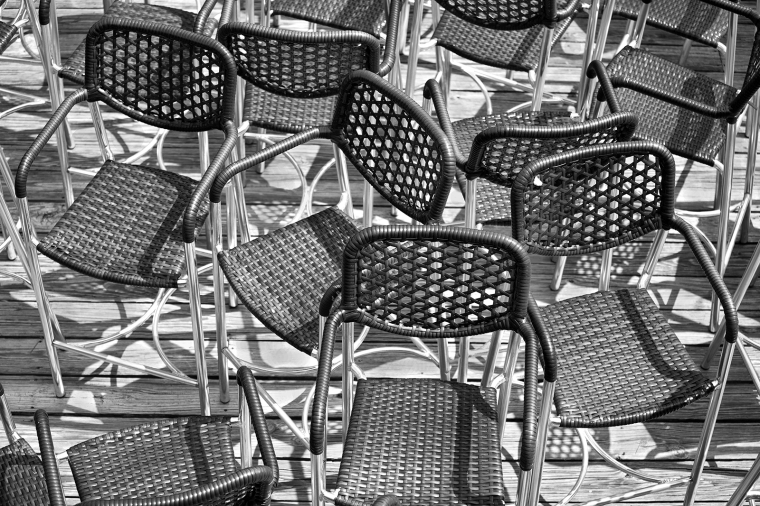 The random arrangement of elements juxtaposing lights and darks in this image comes near to creating abstraction because the subject matter is easily “read.” Another aesthetic feature here is the number of visual elements, each tonal change representing one element. More elements make an image more complex, so there’s increased potential in the information that can be derived such an image. For instance, a photograph of just one chair would make a statement such as, “Look at this chair.” Consciously or unconsciously the viewer would wonder what’s so special about it? The image of multiple chairs generates many more questions: Where are these chairs? Who sat in them? Is this the random aftermath of a business meeting, party or ceremony? Or were these chairs just set to one side so someone could clean the other side of the deck? And is this really a deck? It could be a boardwalk. Might there be more than meets the eye here?

Abstracted images tend to challenge us, however briefly, to make sense of what we’re seeing. We want to grasp the meaning, part of which has to do with why the artist has set the subject matter apart for us by formalizing it within a frame. What did he or she see? And what’s so special about this subject that we should give it our attention? In this we’re attempting to understand the image-maker as well as the object represented.

In looking at an object we reach out for it. With an invisible finger we move through the space around us, go out to the distinct places where things are found, touch them, catch them, scan their surfaces, trace their borders, explore their texture.

In many, if not most instances, the mind of the artist is as important as the subject being represented. We’re always trying to validate our world view or understand if there’s value in someone else’s perception that we might be missing, particularly when there’s a great discrepancy. It’s why art historians, critics and others maintain that the function of art is to challenge, upset or overturn conventional ways of seeing and thinking.

According to social psychologist, Roy Baumeister, “What sets human beings apart from animals is not the pursuit of happiness, which occurs all across the natural world, but the pursuit of meaning, which is unique to humans.” This, in my view, is the highest function of fine art. However we engage, use or perceive art, and irrespective of the medium and intent, those who produce it are holding up a mirror to show us who we are, how far we’ve come and what we’re capable of accomplishing.

Art plays a significant roll in meaning, in making sense of diverse personal realities and collective social realities. It attempts, and at times defines what it means to be fully human. Across all levels, media and applications, the making and observation of works of art engages us in acts of self-reflection and discovery. Just as instruments reach out to explore space and the depths of the oceans, works of art reveal the dimensions and beauty of the human spirit—wherever and however they are displayed.

A society that regards the function of art as entertainment and appreciation alone, fails to understand that its engagement is nutrition for the collective soul. Museums are not merely warehouses for historic and contemporary treasures. Realize it or not, in addition to appreciation, these institutions are arenas rich with potential to stimulate the higher human faculties of observation, imagination, empathy, experimentation, discovery, critical thinking, symbology and aesthetic awakening, all toward understanding and making sense of who we are, what we’ve come through and what we can still accomplish. Some may think this a “soft” or inconsequential enterprise compared to commerce, for instance, but I would argue that gaining this understanding—through feeding the individual soul—is essential for maintaining and advancing the quality of life for everyone.

Like the seers and oracles of old, Art sings and shouts from the axis of truth to wake us up to who we are and where we are going.

Just wandering around a marina in Florida I came upon these chairs. As noted, they were pushed aside while the long deck was being cleaned.