This cloth  is fraying in places. Threads are broken and holes are appearing. Is it beyond repair? Or is there something I can do to keep it from unraveling further?

One of the lessons I learned from Robert Pirsig’s Zen And The Art of Motorcycle Maintenance was that when a system is breaking down, whether a flag, motorcycle or government, what’s needed is attention to the places where the breakages are occurring—attention and studied analysis rather than emotional reactions or simplistic, band aid solutions. I found so many gems of wisdom in his book, that I can imagine a conversation between Mr. Pirsig and myself. It would go something like this. (Quotes are directly from his book).

DS: So Robert—this cloth, this whole system I’m concerned about, it’s large, beautiful and complex. In addition to a hole, there are many rips and tears and I don’t want it to get worse.

RP: Remember the systems principle, David. Attend to the parts and the whole will take care of itself. Think of yourself as a single thread in the system. You’ve already made the first step, simply by caring.

DS: But using your analogy, I’m just one “thread,” barely visible on the surface. Where should I begin?

RP: “The place to improve the world (system) is first in one’s own heart and head and hands, and then work outward from there.” Wherever you are and with whatever gifts you have been given, act with love in your heart, positive thoughts and creative hands. To maintain or improve the whole cloth, be the best thread that you can be. And do what you can to empower and aid the threads closest to you so they can be the best that they can be. Strong threads, joined together and standing in place with integrity makes the cloth strong.

DS: But my “community” of threads, my domain, is very modest. Neither I nor those close to me have the power or influence that the larger strands have.

RP: The strength and influence of the larger strands derives from the binding together of threads like yourself. They are wholes that depend upon the parts. Ultimately, the strength of a cloth depends upon the strength of the individual threads.

DS: When I look closely I can see that this cloth was originally constituted by an interweaving of different colored threads, all aligned toward a common image. Now, to the detriment of the whole, the “strands” are competing for prominence. Abuses of all sorts seem to be pulling the cloth apart.

RP: All along your journey, “you look at where you’re going and where you are and it never makes sense, but then you look back at where you’ve been and a pattern seems to emerge.”

DS: The original pattern? Looking closer I see what you mean. Chaos seems to be normal for complex systems. Each thread has a “mind” of its own and unlimited potential. I can understand why some threads don’t want to fall in line with some other threads. There’s resistance. And as entropy has its way, the system tends to break down. From my perspective the coarser threads, the ones who shout the loudest, tend to overpower the smooth ones in their attempt to make themselves stronger.

Some of them are bound so tightly—perhaps for fear of unraveling?—the boundedness itself is causing stresses that are resulting in more and bigger breaks. The coarse strands are so bent in their ways they’re not open to considering the potentials of the gentler, more congenial threads. With so much resistance within the system repair seems unlikely.

RP: “You are never dedicated to something you have complete confidence in. No one is fanatically shouting that the sun is going to rise tomorrow. They know it’s going to rise tomorrow. When people are fanatically dedicated to political or religious faiths or any other kinds of dogmas or goals, it’s always because these dogmas or goals are in doubt.”

DS: You’re saying that the strands who resist the most are those who have the least confidence—in themselves and in the system as a whole? That leads me to think that somewhere deep within, their vision is in doubt. I can see how that would create stress and friction, even constriction, a holding on to the way things were when the cloth was new rather than adapting to the changes presented by entropy. It would also contribute to fear of the future, like they might never get to the mountain top.

RP: It is a difference in perspective, David. “To arrive in the Rocky Mountains by plane would be to see them in one kind of context, as pretty scenery. But to arrive after days of hard travel across the prairies would be to see them in another way, as a goal, a promised land… To live only for some future goal is shallow. It’s the sides of the mountain which sustain life, not the top. Here’s where things grow.”

DS: Serenity. Nice word. Peace. It reminds me of a TED talk given by peace activist Jamila Raquib. She told how a group of twelve regular citizens in Guatemala brought down their corrupt president and his regime. They put out a call on Facebook, asking their friends to meet in the plaza carrying signs that read: Renuncia Ya, “Resign Already!” To their surprise, 30,000 people showed up. After protesting for a week and getting no results, they organized a strike. “In Guatemala City alone,” she said, “over 400 businesses shut their doors. Farmers throughout the country blocked the roads. Within five days the president and dozens of corrupt officials resigned and were indicted on charges of corruption. The former president and the others are currently in prison.” The story demonstrated her thesis, that “non-violent action works by destroying an opponent—not physically, but by identifying the institutions the opponent needs in order to survive and then denying them those sources of power.” Right action—as opposed to ranting, raving and violence. It’s Mahatma Gandhi’s admonition to be the change we want to see in the world. So to repair this fabric you’re saying I should, first and foremost, attend to the thread that I am by maintaining my strength of character and hold my place in the fabric—peacefully and with integrity to my perception of the whole. And at the same time withhold energies—the sources of power—from those whose actions are stressing the fabric. You’re talking about self-work, and that can be hard.

DS: Right thinking and right acting, you said. How will I know when this self-referential and non-violent approach is working?

RP: “The test of the machine is the satisfaction it gives you. There isn’t any other test. If the machine produces tranquility it’s right. If it disturbs you it’s wrong until either the machine or your mind is changed… The real cycle you’re working on is a cycle called yourself. The machine that appears to be “out there” and the person that appears to be “in here” are not two separate things. They grow toward quality or fall away from quality together… The social values are right only if the individual values are right.”

DS: Obviously, you’re not just talking about motorcycles. I get it. The system is me. I am the system, the fabric of society and the government. One way or another, right where I am, how I am and what I say and do contributes to—or reduces—the quality of the system’s functioning. Also, by keeping myself and my community intact locally, I provide a model for others—of what works, what promotes tranquility and benefit for all. Is that right?

RP: Good David. You not only read my book, you understood what I was trying to say. 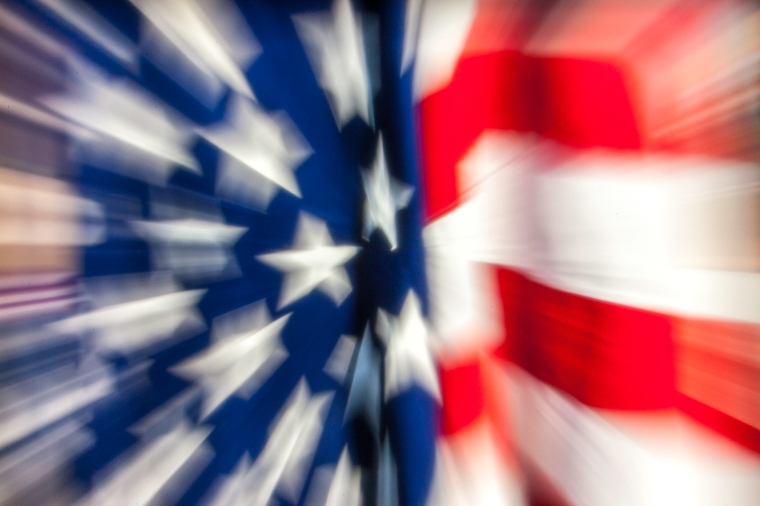 The two closeups are magnified sections of the first image, taken at an antique fair. The last image was created in the studio by photographing another of my images on a computer screen. The motion effect was accomplished by zooming out during a two-second exposure.

[I invite you to visit my portfolio site]

One thought on “The Fabric of Society”