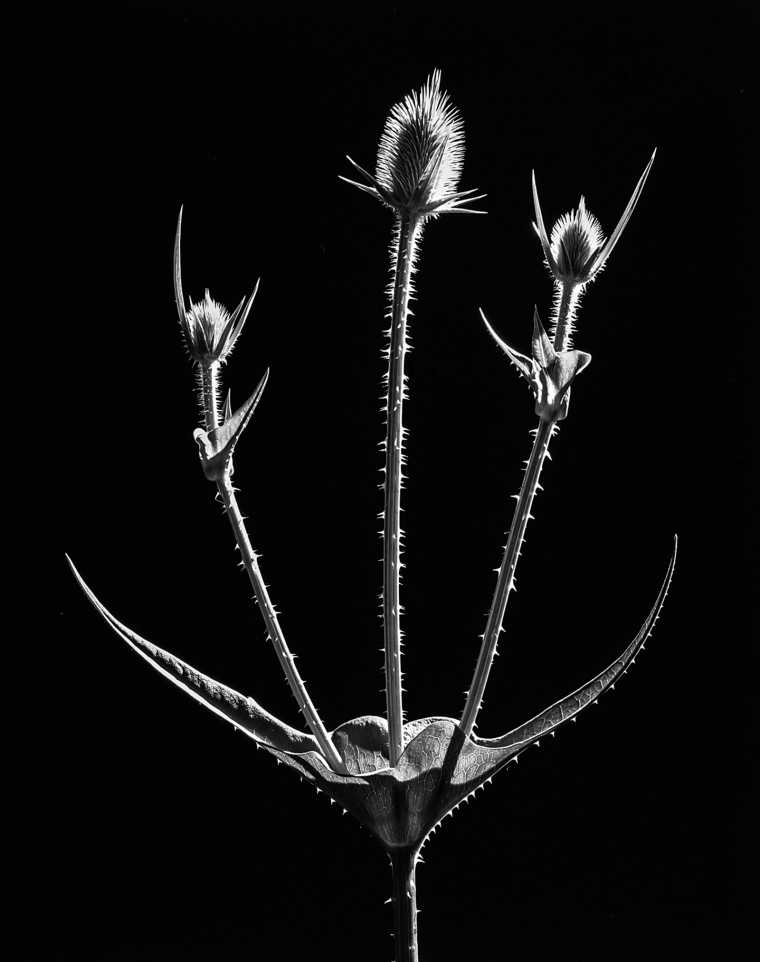 Oddly enough, the word that came to mind when I came across this image was “grace.” Considering the thorns and this subject being no longer living, I wondered why. I think it lies in the composition, the uplifted “arms” that seem to “praise” the thistles; the buds on each side have their arms raised as well, the totality expressing receptivity.

In grade school the nuns taught us that “grace” was a spiritual benefit, a freely given gift from God as sort of a step toward what they said was “redemption,” what I would call realization. What I remember about grace was that it was neither deserved nor earned. Given that, I think that everything that comes our way that lifts us up is such a gift, whether it be a dried thistle, rain, a pet, five-way chili, brisk walk or a good book. Come to think of it, it’s all a gift. Even the disagreeable and disastrous, suffering and cruelty—one way or another, it’s all the gift of being, choosing, doing and learning.

And part of that learning, I think, is seeing the thorns—in life as in nature—not just as ways to get stuck, but as one of nature’s ways of insuring growth and evolution. I also think it’s the artist in all of us to see thorny structures as beautiful. Arguably the greatest gift aside from Being, is being able to see beyond and within.

You can have the other words—chance, luck, coincidence, serendipity. I’ll take grace. I don’t know what it is exactly, but I’ll take it.

P.S. I notice that since I began this blog I’ve cited “the nuns” several times. I wasn’t aware that so many of their lessons had taken residence in my consciousness. For my money—actually for my parent’s money—they made a grand and lasting contribution, both to my path and my way of thinking. I am grateful. What teachers come to mind for you?

Last Fall I took a pair of clippers and a water bottle to a park—French Park in Cincinnati—looking for things to photograph. When I spotted this three-pronged thistle I thought the novelty of three stems growing out of one stalk justified my taking it to photograph. It wasn’t until I turned on a backlight in the studio that I saw how magnificent a specimen it was. One of the great things about photography is that, although the subject may be long gone, it’s beauty continues to grace the beholder.