In ordinary everyday living, as entropy increases there comes a point when a decision needs to be made regarding a system’s status—keep it going, shore it up or abandon it. Building or establishing a system—an object, relationship, business or social enterprise—is creative and exciting. The investment of time, energy and money flows easily in the beginning because the new is desirable—at least in our culture. At that point the purpose and function are clear and the object or system is highly valued, making it easy to see and implement programs of maintenance that will insure continuity.

Well into a structure or system’s lifespan however, as less attention is paid to it—attention is also dissipated due to entropy—breakdowns occur. Automobiles rust, relationships falter, businesses loose clients, houses deteriorate, cities experience social crises and economic decline. The image of men replacing a roof on this old  building evokes a question about a personal and social orientation. Is it best to anticipate breakdowns and take preventative action to prevent them? Or is “don’t fix it if it ain’t broke” a viable alternative?” Dysfunction forces a choice—repair or replace the broken part, ignore the situation, hand it over to someone else or allow entropy to have its way completely.

We witness the consequences of such choices personally and culturally. For instance when it comes to architecture and the use of space there’s the obvious contrast between the British people and Europeans who weigh in heavily on the side of maintenance and preservation and Americans who are inclined more toward disposal for the sake of the new. Perhaps older nations place a higher value on sustainability, and that results in an ongoing examination and consideration of the social and environmental consequences of potential breakdowns. Not that one approach is better or worse, it’s just fascinating to observe how different cultures respond to entropy. Around the globe we can see it in a city’s architecture and use of space. Our impression of cities we haven’t visited may be stereotypical, the result of seeing them in movies and on television, but the choices are evident if we care to look.

An even more dramatic and telling contrast relating to the valuation and assessment of architecture and the use of space—to proact or react—is the mindset between the modern world, which perceives objects as separate and dead, and ancient indigenous people who view everything as alive and interconnected. In the United States we tend to walk away from buildings and houses that have outlived their usefulness. We even leave the expense of demolition to the next person or entity that wants to use the land for something else. And so unwanted structures become blights—sitting, deteriorating and decreasing the value of the properties around them. Juxtapose this mentality with that of the Ancient Maya who buried everything. From the poorest homestead to the tallest temple-pyramids, when a structure outlived its usefulness a holy man or king performed a termination ritual to remove the spirit of the place, and then they buried it under dirt and stone so it could revert back to jungle. They invested nearly as much time and energy burying a temple as they did building it. Hundreds of cities and villages were buried and the practice persisted for close to fifteen-hundred years. It’s why there are so many “lost cities” of the Maya. Whatever their motivation, I stand in awe of the respect that it shows—for nature and future generations.

Valuations and assessments prompted by breakdowns are in evidence in most of our neighborhoods. Some folks do little or no maintenance, others only do what’s necessary. Still others engage in preventative maintenance, but they appear to be in the minority. Understandably, it takes time, money and energy to maintain and plug holes—literally.

My pattern has been and continues to favor more of a reactive posture. I generally wait for a sign that some object or system is exhibiting entropy. The attitude of why fix it if it ain’t broke allows me to continuously focus on the things that are uppermost in my mind moment to moment. Linda reports that the downside to the proactive approach is that thinking ahead to possible breakdowns contributes to worry. Yet we often benefit, sometimes grandly so, from her preventative measures. It seems that women tend to favor the proactive approach, but I wonder if that’s not just another stereotype—or might it be due to the nurturing mother role.

I do know that my reactive set point shifts toward proaction as the system under consideration increases in complexity and scale. I’m okay with forgetting to change the furnace filter or ignoring the “low tire pressure” warning in my car, at least for a while. If the consequences are small, I can tolerate some risk. What I can’t abide are the consequences of not maintaining my teeth and other physical systems. And when it comes to complex physical and social structures, systems and issues over which I have little control—like cybercrime, climate change, gun violence, poverty, etc.—I am eager to become proactive. Minimally, I vote.

Real freedom is creative, proactive, and will take me into new territories. I am not free if my freedom is predicated on reacting to my past.

I was driving back to the office from a meeting when I saw these workmen on the roof. What struck me was their strong silhouette against the sky. I happened to have my digital camera kit with me and because the rooftop was quite a distance I put on a telephoto lens. I made several exposures, all on a tripod to minimize camera shake. I liked the above shot because the postures of the men indicated the energy they put into their work.

In preparing this image for presentation I graded the otherwise blank and bright sky, and I lightened the moulding to bring out the detail. In doing so I enlarged the image on the screen and found a little surprise in the distance—a bird standing on a church steeple, which looks to me like a finger pointing to the sky. 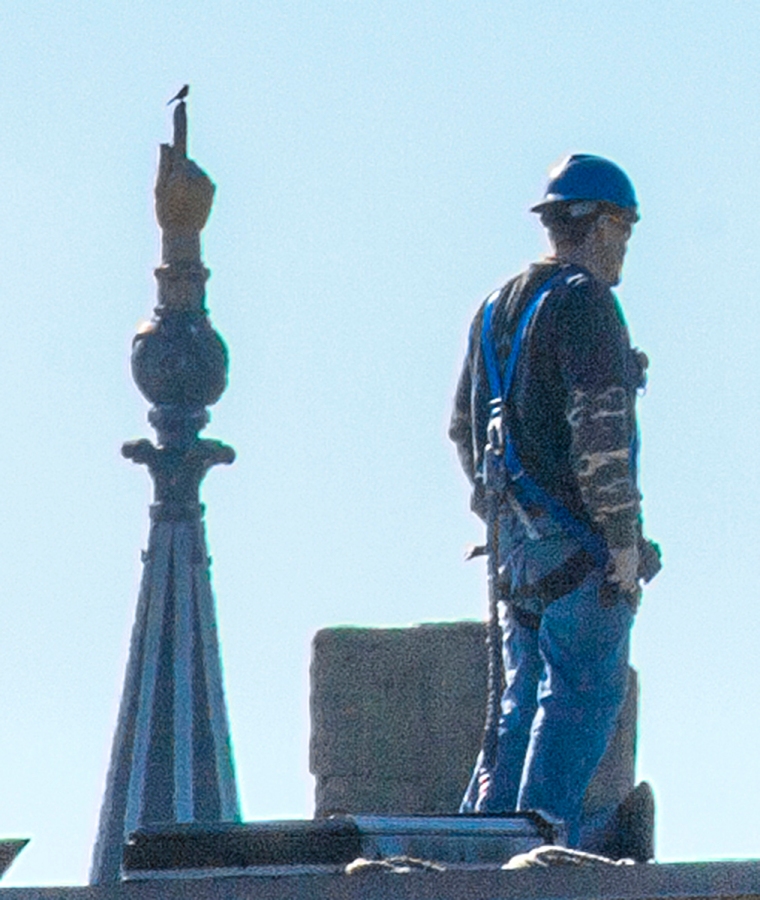