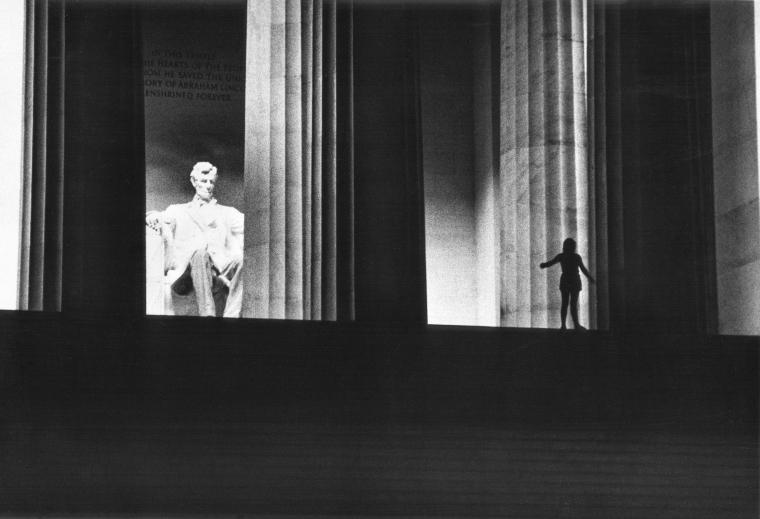 This image brings to mind history, not as a subject to be studied but as a lived experience. The posture of the woman seems to say she is exhilarated, feeling the power of the place in that moment. As well, her juxtaposition with the columns and the sculpture provides a symbol of humanity standing on the threshold, looking to the future from a background of struggle and achievement—triumph over adversity and a shift in social consciousness.

The way I was taught, history amounted to a series of wars and power struggles, accounts of people who led notorious lives in the context of making or engaging in tragedies and atrocities, always from the perspective of Western civilization. Nothing before it. And barely acknowledging that cultures in Africa, Polynesia, Australia and New Zealand, Central and South America, China and the rest of Asia even existed. Japan was an exception because of World War II.

Much later, graduate courses in anthropology introduced me to Native American Studies, Primitive Religion, ethnology and the tools of archaeology, paleontology and art history. Wars and conflicts were part of it, but there was so much more! Exposure to the values, customs and belief systems of a much expanded list of cultures opened my eyes to the validity of and underlying reasons for differences in perceived realities—and how people responded to them. I discovered that, irrespective of time, place, religious beliefs or social conditions, even genetics, we human beings have more in common than we do in difference. And that we have been motivated by the same quests since the discovery of fire—survival, health and happiness, comfort, affection and affiliation, creative expression, constructive ingenuity and the making of meaning to name some of the more obvious.

From this broader perspective, history is less about “Who did what to whom, when, why and how,” and much more about identity and perception. Who are we as a people? What do we aspire to? How will we use our capabilities and technologies? Every day, the mass media provides ample demonstrations of humanity struggling to coordinate, to resolve and integrate differences in perception. How do we view “God,” the cosmos, the world and our place in it? And regarding responses, what is our proper relation to those who do not share our perception? In answering these questions through action rather than words, a people constructs their true identity. While our souls may be perfect in being, we are as yet imperfect in becoming. So how do we, given what we say of ourselves and how we see of the world, manage our individual and collective responses? I like to think it’s by constructing our own “house” rather than tearing down anyone else’s.

The office of President of the United States is in large part about defining both who we are as a people and the part it’s appropriate for us to play on the world stage. What are our unique gifts to the world? In large part, the tools presidents reference are the Constitution, the reasoning of the Founding Fathers and the legacy of those inside and outside of Federal Government who have contributed substantively toward higher aspiration and integrity to their vision of “We the people.” So for me, beyond but including Abraham Lincoln’s many accomplishments, his vision and integrity, I appreciate with gratitude that he affected a shift in the way we perceive ourselves—a nation united and a people undivided “With liberty and justice for all.” It’s a shift that’s still being sorted out. But from the perspective of human evolution it was a contribution of the highest order.

For me, the memorial is not just a reminder of the man and his legacy. It’s one among many monuments around the world that celebrate the struggle and quest to discover what it means to be fully human. It’s the path we refer to as history.

In our time, what is at issue is the very nature of humankind, the image we have of our limits and possibilities. History is not yet done with its exploration… of what it means to be human.

After a long day of deliberation, a group of friends and I were high with excitement about a project we were working on. Someone suggested we visit “Mr. Lincoln.” So around midnight  we climbed the steps of the Lincoln Memorial. I’m tempted to say that someone inside was “playing” his flute, but that’s not accurate. He was sounding it, sending pulses of tone like puffs of smoke into the chamber, letting them diminish into silence before sounding more. Note after note and an occasional flourish or trill filled the chamber with reverberating sound. It sent chills up my spine like never before or since. The prickling  became so intense I clasped my hands over the top of my head to contain it. Besides the flute player and a guard, we were the only ones there. We stood in silence for about a half hour, just listening, wandering and watching—like the woman in this photograph. At times, the sounds were so exhilarating they seemed to lift me off the floor.

We spoke with the flutist afterward and I arranged to return the next night with a video camera to interview him and record his magnificent, reverberating sounds. He didn’t show. Unlike the guard who ignored us the previous night, the guard that night said the park service didn’t allow musical instruments inside the chamber. So while I didn’t do any taping, I made photographs with a 35mm camera. Fortunately, I had a telephoto lens with me. I had a heavy tripod for the video camera, but the bolt was too big for the still camera so I just set it on top of the tripod head to steady it. The long exposure made the image a little soft but I was able to sharpen it a bit in Photoshop.

One thought on “History”